Established in September 1990, Glenbrook Toastmasters is a successful, dynamic and friendly club.  The club meets twice a month at Glenbrook.  It is one of the premier toastmaster clubs in the Blue Mountains, west of Sydney.

We have more than 20 members to help you learn, grow and achieve your goal of being a better speaker. 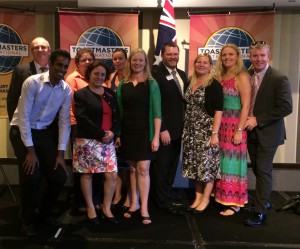 Other membership programme awards we have achieved include:

We provide one of the best forums available for you to improve your public speaking and communication skills. You will “learn by doing” in a mutually supportive and positive learning environment. All our meetings have a diverse programme and everyone volunteers to take on a variety of assignments at different times.  It is a lot of fun and plenty of support and encouragement from club members.

There are no social distinctions in Toastmasters – age, background, beliefs – all are warmly welcome. We’re all there to help one another improve: from people in their first job; on the exective ladder; retirees; volunteer workers; those in promotion or tertiary study; experienced or inexperienced speakers – there is room for everyone and we warmly welcome visitors and new members.